Skip to Main Content
I’ve only just realised that unless you are Scottish or have lived at one time in Scotland you probably will not have the slightest clue what I’ve been talking about when I mention anything about Perth Town Lade in this blog.
Lots of Scottish towns have their own lade – and this lade of ours has a little history all of its own too as its the earliest known in Scotland.  Perth Town lade can be dated to around 1153 and many would  describe it as a man made canal.   At first it was the defensive moat around the walled town then much later when the town’s main industry was grain and flour milling the water from the Lade was used to power the mills along with coal.  Later in the 18th and 19th century the Lade was used by the textile industry and by 1824 there were 8 dyeworks on the Lade but by the 19th century only 2 were left.

How the Textile Industry used the Lade

The water from the Lade was directed from the Weir to the first bleachworks on the canal.
This is the waterwheel in1978 when it was still in use.
Today the wheel is overgrown and the buildings to the left have been demolished to make room for new homes.
Once the water passed this water wheel it soon divided into two branches.  These two branches were regulated by a system of sluices and channels depending on the needs of each mill.

Today those channels are still visible along with some of the old metal cogs and wheels from the sluice gates and water freely flows through them.

One branch fed a Beetling mill (that’s where a finishing process for cloth involved the pounding of the cloth with heavy weights).  The Beetling Mill was to the right of this photo below.  Only Cottages are left at this site today.  Along here the Caledonian Railway line ran and you can see the disused railway bridge in the photo below.  Today  that railway  bridge no longer exists other than the stone supports.  There are only a few clues in the local landscape that a railway once ran through the area like a  a row of distinctive cottages that  were the station buildings and a disused tunnel I can see in the far distance at the far end of fields.
and and the other branch fed the Old Shepherd’s Mill below.
The water  was pure and soft so was just perfect for bleaching and dyeing fabrics.  Manufacturers in Glasgow would send their raw  fabric to the Lade for treatment via the railway line.

The cloth was steeped in the lade water with various blends of ashes added.  The main ash being soda ash which was prepared from burned seaweed.

Then it was heated and left to ferment and left lying flat on the grass for weeks at a time.
The next step was to bring it back into the mill  for it to be washed and then steeped in milk  which was again left to ferment. Then the cloth was laid out again  in the fields to dry in the sun. This whole process was repeated many times to get the desired whiteness.
Any flat field near the Lade would be used for that purpose – hence the word “bleachfields”.
So important was this trade that large areas of good arable land that could have been used for farming were used instead for bleaching.  Its been said that  many a vivid colour to the lade water from the dyeing process could be seen or else foam from the bleaching floating down stream.
Up until 1832 the lade water was also the workers main domestic water supply as the council established a new waterworks supply after many complaints about its quality.
Here’s a little local story …

Sixteen  women on May 4th 1618 were brought before the Kirk Session (church committee) for superstitiously visiting St Conwalls Well and depositing pins and headlaces.
A lot of locals and myself have always thought that the well was at the corner of the brae down below the castle as there is a natural spring there where many people collect the water.  But thanks to Betsie who has contacted me through comments here she too has been looking for the well and its not below the Castle but  somewhere in the locality of Shepherds Mill …
Now I can’t be 100% sure about this but in the area marked in the map above there is an area  with lots of trees across the road from the Shepherds Mill and in that area of undergrowth there is a little area fenced off  with barbed wire around the top of it. You can just about make it out in the middle of the photo as the grass is so long in that area.  Could that possibly be where the well was situated?

The lade created employment for a large population and half of those were women and children.  Each Summer the City Fathers of the Town Council would walk along the lade and inspect it and at the end of their walk they would be rewarded with  strawberries and cream.
The last industry to close along the Lade was the Bleachworks  in the 2nd photograph in 1981 and the owner’s home was turned into a hotel  – and he even had part of the Lade diverted so that it would feature in his front garden! now the Huntingtower Hotel.
Once the Lade reached the town it again it divided into two to serve all the mills in the town and  providing a continuous moat around the town walls.

Lower City Mills once the Grain Mills  now are occupied by the Tourist Information Centre.  Upper city mills is now a hotel – the Ramada Jarvis where you can  view the lade from the hotel garden  and watch water trickle down the water wheel from the reception area and lounge.

Today  Perth lade is a tourist attraction with a 1 – 2 foot wide path along the rural stretch with reeds, rushes and sedges carpeting the banks along with aconites, wild ranunculus ficara, snowdrops and daffodils  in the spring time. The rest of the lade is more like a canal.  Some parts run along peoples back gardens and are not visible to walkers on the public footpaths.  Half a million trips are made along the lade each year. It is so lovely to walk along and much favoured by all the local wildlife.  Its a great green corridor more white than green just now!  where many species can move, and find food and shelter.   Perth Lade wildflower images can be viewed here.
Here are some more photos – December 2009

These are some photos from New Years Eve 2010…

The new………ish moon  shimmers at the break of the final dawn. 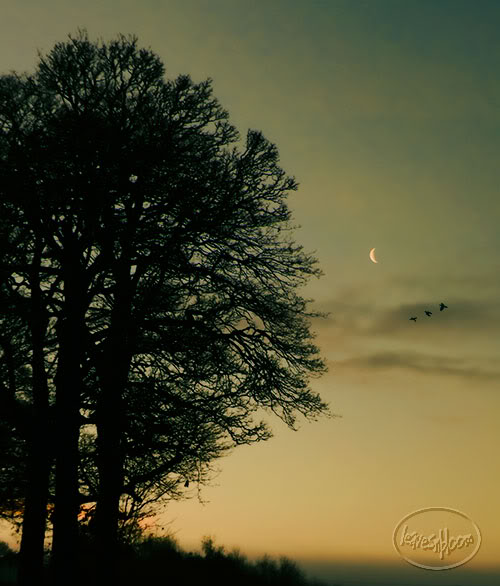 Previous days had been dreek with snow, fog and mizzle merging together into one big Gaussian greyish blur. 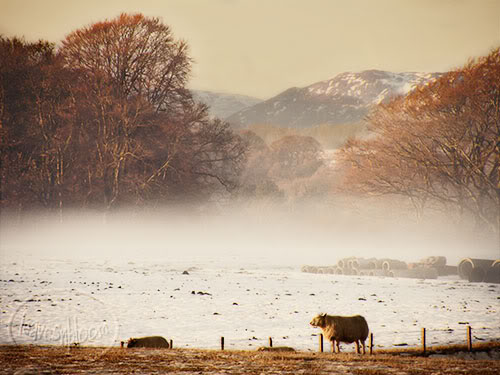 As the last day slips away the mountains start to appear as if a mask has been lifted from the landscape.

I hope you enjoyed discovering a little more about Perth Town Lade.  Unfortunately as the years go by it gets harder and harder to preserve the landscape as it once was.   Even since I took the photos above so much has changed over the years.

The ash paths were widened a few years ago and the wildflowers are slowing getting established again.  Let’s hope the council preserve as much of the land as possible nearest the lade as planning permission and a new road in the future will change the surrounding landscape so much.

One evening we drove to our nearest bluebell wood in Perthshire to see the glorious...

Scotland not only is famous for the thistle but also for its Scottish heather that...

embed copyright and metadata in your photos – View on Flickr Bauble cupcakes Here's a tutorial on...

Back in July I signed up for the Summer Google plus Artistic Photography Mentorship program...