Skip to Main Content
The dawn awakens down by the lade and through the pale light of the morning sunrise I look up from the grassy banks and see a dark and mysterious silhouette  forming in the midst of the trees.  Trees bereft of their leaves and so old that they could tell many a story I’m sure.   Is it a large house or a mansion you might ask?  Nay its a castle full of intrigue, secrets and legends from medieval times.
It’s a place where Mary Queen of Scots frequented and spent her honeymoon.  A place where her son the young King of Scotland James VI, was lured to in 1582, and then kept captive for over 10 months.  (KJV bible was named after this King).  A castle where plots, conspiracy and murder were devised and the masterminds eventually hung, drawn and quartered by the Kings royal decree for high treason.  A place where the family name Ruthven and their castle –  The Place of Ruthven  was forfeited forever due to being traitors of the Crown and the castle renamed Huntingtower.

It’s a place of romance where a young maiden named Dorothea was in love with a servant in the castle.  What a scandal!Where a mother heard rumours of a secret love affair and tried to find out if it was true one night.  That same night Dorothea who was in her lovers chamber heard her mother’s footsteps in the servants quarter.  She got up unto the roof of the tower and leaped from one tower to the other a distance of over 9 feet.  She  returned to her bed in the other tower undetected.  A much relieved mother found the servant asleep alone that night but the very next day the couple eloped never to be heard of again.

It’s a place where weddings takes place today and the sound of bagpipes can be heard floating down the valley  in celebration of the event,  something Dorothea could only have dreamed of.

It’s a place of legends where a tall lady called Ma Lady Greensleeves dressed in green silk is said to walk the grounds and her omen is a forewarning of  disaster.  One unfortunate traveler in 1930 claimed to have seen her in the castle corridors and alas he drowned the next day.  Some say that it is Dorothea who walks the grounds of the Huntingtower. 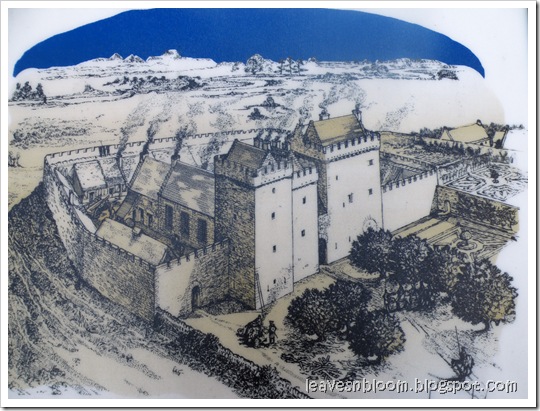 artists impression taken from  the information plaque outside the Castle
It’s a castle that once was two separate towers – its a tale of 2 towers!  The land was shared between 2 brothers each wanting a tower of their own only in later years for another resident family to join the 2 together.

During the 18th Century Industrial Revolution

It’s a castle that became run down and forgotten and sold for 11,000 pounds in 1805.  No longer fit for royal circles  but  used instead as accommodation for the workers of the nearby John Buchan cloth-printing factory down by the Perth lade.
Stones taken from the old walls and outbuildings were made into new homes  in the valley below.  Still neglected and forlorn it was finally sold to the state in 1912.

Front of the castle overlooking fields where gardens once were laid
Now Historic Scotland look after the medieval building and tend the herbaceous borders  making sure that its memories and history are kept alive for all who come to visit.

I started photographing garden birds in my early blogging days. Back in 2010 and 2011...

Here's my tutorial on how to make colour palette photographs. What am I going to...

Here's another one of my tutorials. This time it's all about my still life macro technique for...