I often get asked, “How do I look after a zygopetalum orchid?” I decided to write a blog post as it would be the easiest way to communicate this specialist advice. Moreover, my customers would be able to refer back to the information I verbally gave them at their own leisure.

This is the Zygopetalum ‘Lousiendorf’  orchid that I tend and nurture. Over in the UK, it is commonly known as the Ladybird Orchid though I don’t know the reason why. It has the most beautiful markings of brown and green on the petals that look like a tiger print and a white with purple streaked labellum.

What’s In The Name zye-go-PET-ah-lum? 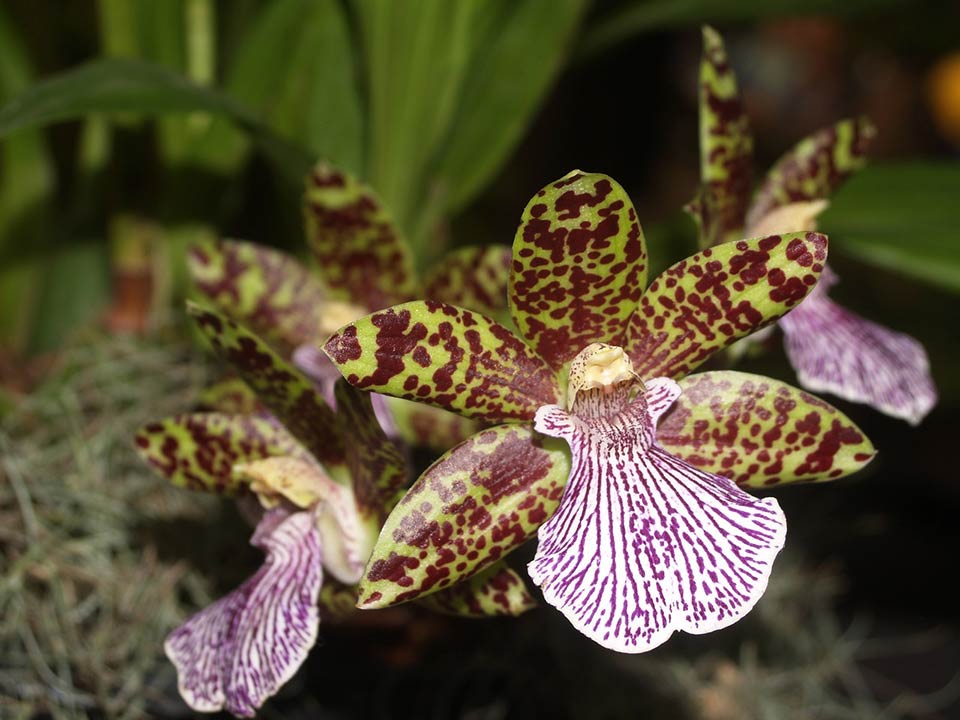 It derives its name from the greek word “Zygo” which means “yoke”.

Sir William Hooker (world famous orchid collector and specialist)  in 1827 was given this orchid by John MacKay who found it in Brazil.  Sir William thought that the way the petals were connected to each other reminded him of a yoke that oxen used around their necks and the “petalon” being the petal and “petalum” being the plural for petals.

Just one of these plants can fill a whole room with a wonderful aroma and the warmer the room the more intense the fragrance becomes. The fragrance is quite heavy and reminds me of the scent of a hyacinth.

How to look after a Zygopetalum Orchid – Position

I find it easy to grow as watching the colour of its leaves helps you decide whether it is in the right position or not.  If the leaves are dark green it needs a little more light and yellow leaves mean that it needs to be moved to a shadier location as it should ideally have light green leaves. In the UK it does well on a bright windowsill but away from direct sunlight.

It doesn’t like a temperature lower than 12°C during the wintertime but it also doesn’t like prolonged temperatures higher than 27°C as that might prevent it from setting flower buds.  Its ideal daytime temperature range is approx 18-24°C.  Just keep it away from drafts and radiators – any houseplants worst nightmare!

How to look after a Zygopetalum Orchid – Watering

Like most orchids, it doesn’t like wet feet and cold water will shock its roots and the roots will stop growing.  It loves to get a good soaking especially when it is actively growing so that any salt build-up from the last watering gets rinsed through the pot. Rainwater is best but I never use it.  Far less water is needed when the temperatures are low but never let it dry out.

My Zygopetalum likes to get misted too – but I always do that during the mornings so that the leaves have time to dry during the day.  Just make sure that when you do mist the leaves that it’s not sitting in direct sunlight as the water droplets can burn the leathery leaves. Never let the pseudobulb (a swollen stem at the base of the plant) become wrinkled as that puts stress on the plant and it may not flower again for you. It does like to sit on a pebble tray especially in a centrally heated room to keep the humidity levels high.

How to look after a Zygopetalum Orchid – Feeding

I find the easiest types of orchid food to use are those that are suitable for when the orchid is in bloom and then a different one specifically for when its in green growth. Just follow the manufacturer’s instructions. But personally I’m not too good at remembering to feed my orchids.

It likes to be repotted once every 2 years but not during the summer months as it upsets their growth pattern and possible bud formation.  The secret to success with repotting any orchid is to make sure that the compost is dampened before you pot it on and then give it just a little water over the next few weeks so that the roots can settle again – and no feeding is required during this time.  There also needs to be 4 pseudobulbs in each pot so that it will have the strength to reflower again.

Most orchids when you buy them in shops/garden centres have been grown in the same bark compost for a long time and the bark is probably starting to decompose. When bark starts to decompose it draws in any available nitrogen – so your orchid should probably be repotted just after you purchase it.

This blog contains a series of posts on houseplants that you find for sale in UK garden centres. Here’s a list of plants I’ve covered … but more are to follow very soon:

How to get  a bromeliad to flower?

How to look after a Calathea crocata?

How to look after an Oncidesa Sweet Sugar Orchid?

Let me introduce you to Masdevallia ‘Rosie Nixon’

How to look after a Poinsettia at home

How to look after a Phalaenopsis * blog post coming soon

How to look after a Cymbidium * blog post coming soon

How to look after a Denrobium * blog post coming soon

The most noticeable shrub this month is the winter flowering witch hazel – Hamamelis x intermedia...

The air is full of pollinators as I’ve got myself a nectar bar in the...

The Large Red Damselfly metamorphosis is a wildlife sighting I had never ever witnessed before. Who loves...