Last weekend I started to lead you all on a CS Lewis Narnian Trail. Part of that trail was through East Belfast and the Mountains of Mourne. It’s an area known as the ‘real-life Narnia’ as the scenic beauty inspired CS Lewis to write about the land of Narnia. In fact, if this is your first visit here you can read and view the pictures here. However, just let me finish off our little trip around the Mournes with the following:

Northern Ireland is known for its myths and legends especially of giants. And like myself ‘Jack’ would have been told those stories as a child. Furthermore, the Legananny Dolmen in Co Down is supposed to mark a giant’s grave. Moreover, the word ‘dolmen’ is an ancient name meaning a ‘Stone Table’.

Thanks to Kitty from Into My Own for allowing me to use her photo of the stone table at Leganarry Dolmen. 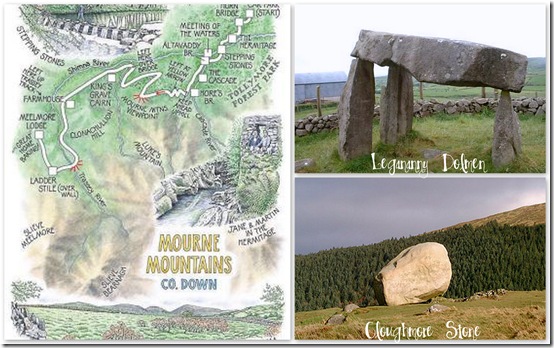 As for the big boulder overlooking Carlingford Lough at Rostrevor  – it’s quite a stone!  Supposedly the famous giant Finn McCool got into a fight with Ruscaire the Ice Giant. That’s what I was told as a child! This is supposed to be one of the boulders they threw at each other across the Lough.  Its called the Cloughmore Stone or as the locals call it ‘The Big Stone’.

I spent many a Saturday afternoon up at the Big Stone on family picnics.

That part of Rostrevor that overlooks Carlingford Lough is my idea of Narnia” ~ C.S. Lewis.

Our Meeting With Digory

Eventually, we headed back into East Belfast again. This time to the Holywood Arches and just wait till you see who we bumped into.

No other than Digory!

The bronze sculpture depicts CS Lewis in 1919 as Digory Kirke from The Magicians Nephew opening the door of the wardrobe.

The artist Ross Wilson, states that the sculpture seeks to ‘capture the great ideas of sacrifice, redemption, victory and freedom for the sons of Adam and the daughters of Eve’ that lie at the heart of The Chronicles of Narnia.

“The image of the man walking towards the wardrobe is a stylized heroic image of C. S. Lewis representing the searcher: an almost ‘everyman’ setting out to find Aslan. I hope it will be seen as a pointer as well, to show that sometimes the greatest things can be found in the unlikeliest of places, a wardrobe, a world beyond a wardrobe”.

Likewise, I just had to sit on the chair! 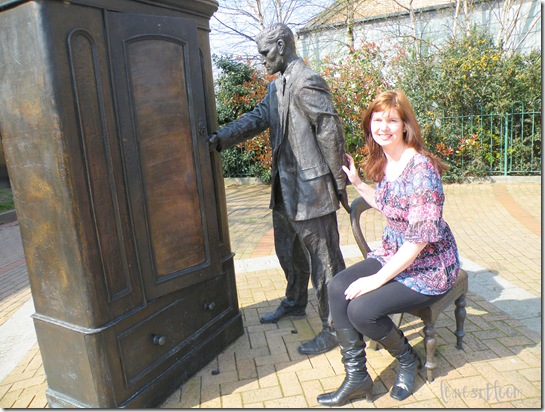 Ross Wilson “The chair may be used as a vehicle of transport; as the viewer is seated on the bronze chair they travel through Lewis via imagination to Narnia”.

There are many inscriptions on the back of the wardrobe. 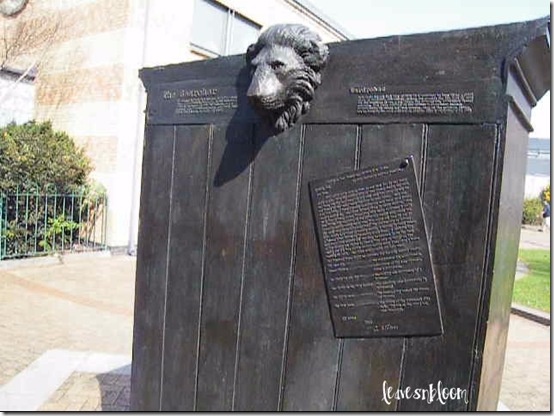 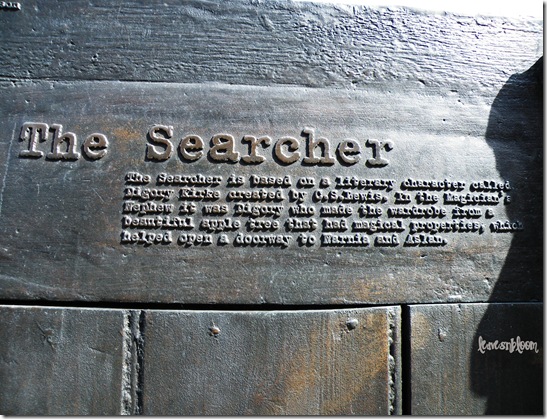 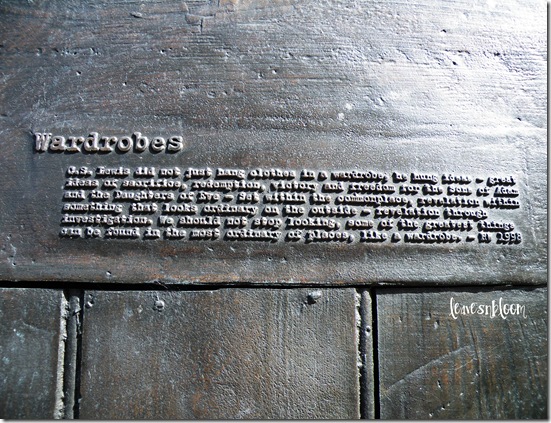 .
A letter written by CS Lewis to Anne Walker aged 10. 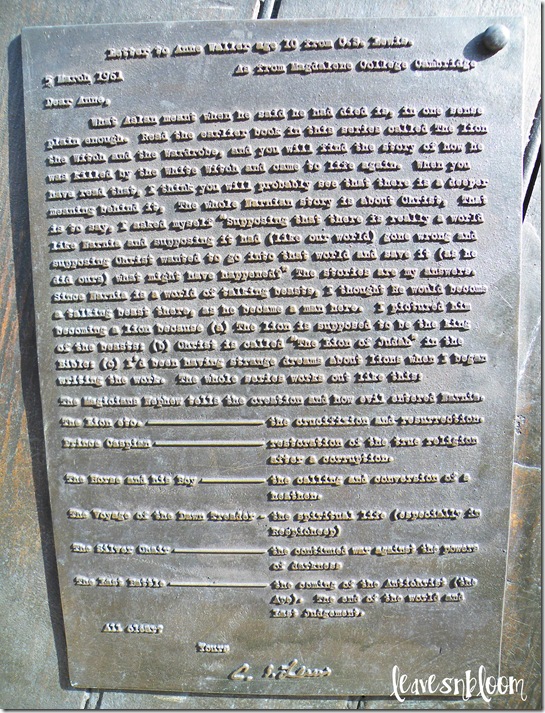 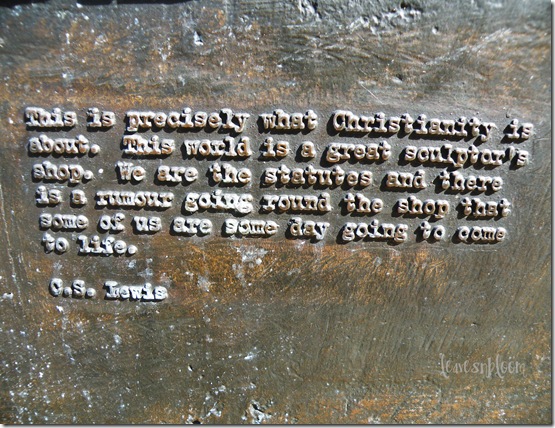 .
And amongst the monobloc paving are 4 large rectangles of granite in a square encasing the sculpture  (you can just about see them in the collage photos above in light grey). Each one of the granite blocs has one of the 4 lines engraved:

As you can see this post is lacking flowers today but there still is a lot of colour to the next bit of the trail….
Further on down the road from here just off the Newtownards Road are some wall murals.  Belfast is very famous for its wall murals. But today instead of there being paramilitary propaganda, hooded gunmen and riffles painted on the walls in Dee Street and Convention Place there are these in memory of CS Lewis. However not all paramilitary propaganda has gone from the area. Frankly, it never will.
. 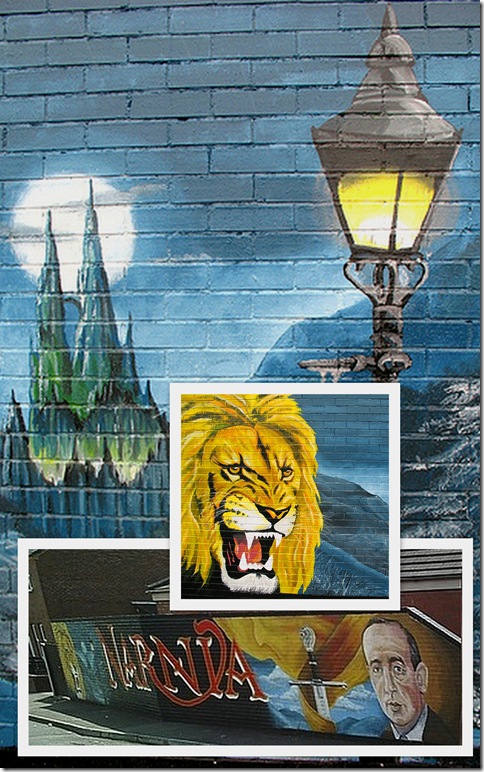 Since I started writing this article I have kindly been given permission to show you these photos. I will eventually be adding them to part 1. But in the meantime, Mr Richard James who took the photos was given a private tour of Little Lea with his son in law.
He took a photo of the front of Little Lea and inside the little room where Jack and Warren played. And where they had their telescope.
.
Do any of you know which day CS Lewis died on? – well you’ll never forget now! President JF Kennedy was assassinated on the same day –  November 22, 1963.  He died at The Kilns, Oxford, England. Have you visited any bluebell woods in Perthshire? In the month of May many of... Here's one of my photography tutorials  on how to fix colour casts on images ...... The dawn awakens down by the lade and through the pale light of the morning...