Skip to Main Content
What’s in flower in June 2012?  well quite frankly too much to fit into one blog post! It’s really an in between season time here. There are lots of flowers nearing the end of their bloom time. While others are about a 5-7 days behind on last years Garden Bloggers Bloom Day post.
There are plenty of weeds flourishing as well as I’m really only a weekend gardener this year.  Never mind spending hours upon hours  photographing the gradual metamorphosis of the damselflies in my pond.

Consequently who would weed with that going on in the garden?

Anyway here’s a little taster of colour that surrounds me in the garden these days.

What’s in flower in June?

There’s a blue mist of forget me not flowers – Myosotis sylvatica. They spill over in the borders and make a great foil and background for the other flowers.

Down in the Muddy Boots Corner is a large drift of Astrantia major ‘Rubra’ growing in the most ghastly of conditions.  I’m always amazed that these plants manage to survive in this north facing heavy wet soil that is so prone to flooding. But they are so resilient!  They will provide the pink colour in this part of the garden as the candelabra primula’s start to fade. If you want to see a more unusual view of a candelabra primula then click on this link: Primula Millar’s Crimson – the candelabra primula

In the Japanese part of the garden the Philadelphus coronarius ‘Aureus’ has finally flowered after a hiatus of 4 years.  I pruned the bush just after moving it as quite a mature shrub and it’s taken all this time to recover! 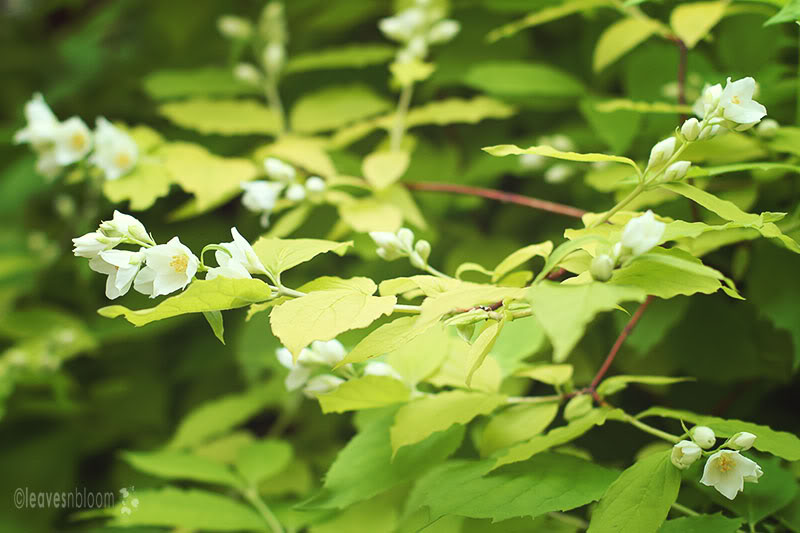 This is part of the Laburnum border. Just now the perennial wallflowers  –  3 Erysimum ‘Apricot Delight’ and 3 Erysimum ‘Bowles Mauve’ are taking centre stage as the Laburnum tree has nearly finished flowering.

While in the ‘Little Dixter’ corner of the garden the Physocarpus opulifolius Diablo has started to bloom.

The Large Red Damselfly metamorphosis is a wildlife sighting I had never ever witnessed before. Who loves...

The garden finally is bursting into life with the April blooms in my garden.  As...

Do you grow winter flowering witch hazel shrubs? Quite frankly anything that flowers in Perthshire...