Skip to Main Content
Winter has it’s own little bit of colourful magic and there’s some in my Perthshire wildlife garden! Especially if you grow Hamamelis x intermedia Jelena. Now I know that most of us don’t normally associate January and February with colour  in the garden but it doesn’t have to be that way!  Colour doesn’t have to be all in the imagination!   I promise that there are no brooms or black cats in sight  but there certainly are some spidery blooms.

Are you ready to go on a witch hunt? …come on then!

By 11th November 2012 the clusters of  flowers from one of the witch hazels in my garden –  Hamamelis x intermedia Jelena had just started to unfurl their magic.  The flowers usually remain on the shrub for about 6 weeks and normally I have flowers from December right through until February on ‘Jelena’. 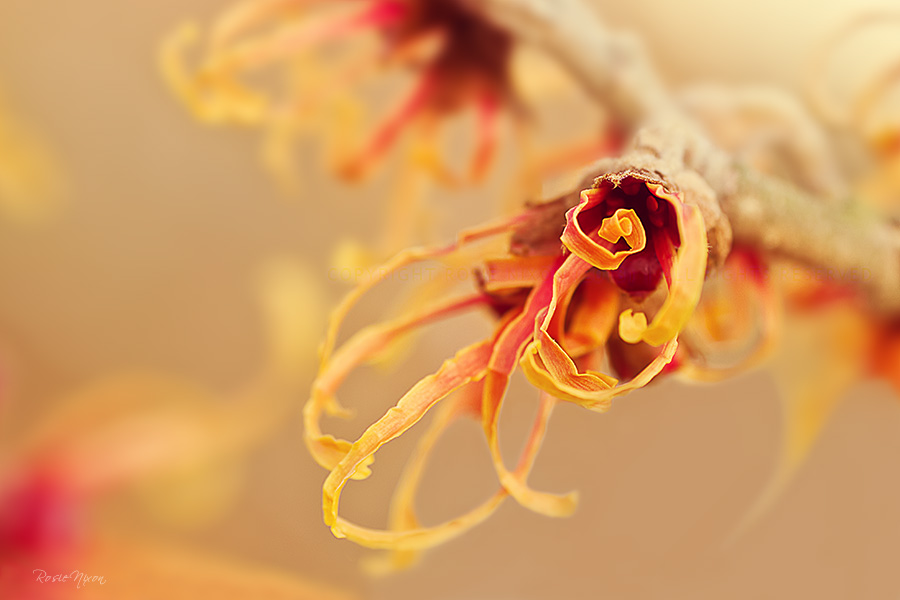 Each flower has 4 petals suffused with orange, red and copper tones while around the base of the petals are 4 burgundy wine sepals.  Even once the 4 petals have gone the burgundy sepals still look attractive on the bare branches of the shrub.

Hamamelis x intermedia Jelena was my first purchase almost 11 years ago and I must admit that I was shocked at the price.  Let’s just say that they are an investment as grafted or budded shrubs are always that bit more expensive.

After 11 years and now about 2 metres tall that investment is really showing it’s magic in the garden.

The flowers are frost resistant. The plant produces a sugar called hamamelose which has the same effect as antifreeze and stops the flowers from freezing.  Just like the snowdrops I wrote about a few years ago  Snowdrops  – Natures Antifreeze.

If you already have a witch hazel in your garden you’ll maybe never have noticed but the 4 spidery petals curl up more on cold nights to also protect themselves.

Even though Hamamelis x intermedia Jelena is hardy and in flower at this time of year it’s easy to forget that a newly purchased plant will still need a little bit of protection with horticutural fleece if it’s planted during the winter months. (Witch hazels are listed as being H5 – see the scottish hardiness ratings for further details). 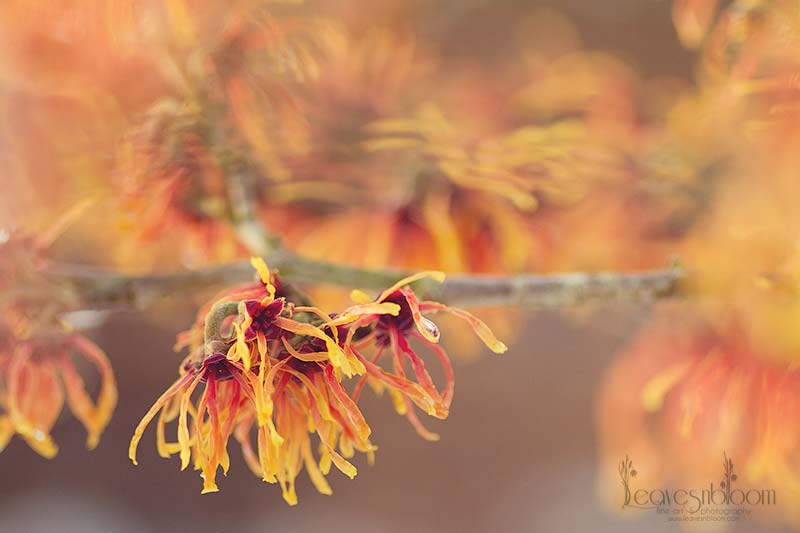 #1  Here in Scotland they need to be planted in full sun while in sunnier locations further south they might prefer a more dappled shade position.

#2  All you need is a sheltered spot with good well drained soil – preferably on the acidic side.

#3  It’s best to plant it somewhere that it can been seen from indoors. As it matures you can cut a few branches to bring indoors and enjoy those lovely colours on your windowsill.

#4  Witch hazel ‘Jelena’  is quite vase like in appearance. It needs quite a little bit of room to ‘show off’ those branches as it will reach 3 metres tall.

#5  Don’t be surprised the plant doesn’t do much in it’s early years after being planted.  They are slow to established in the garden and it’s a few years before you see much growth.

#6  As most witch hazels for sale are grafted or budded you might find that the odd shoot from the rootstock – Hamamelis virginiana will appear near the base of the plant. In all the years of growing Jelena I’ve only had to pull off a few suckers twice.

TIP: never cut off suckers but pull and tear them away from the rootstock. Otherwise you’ll just encourage more suckers to grow.

#7  Pruning is never drastic and if needed a little can be done in April. Prune the previous years growth back to two buds.

#8  You’ll also need to watch the watering during the summer months. Especially if it’s newly planted as it is prone to droop its leaves in dry weather.

#9  As the shrub is deciduous it has a nice display of golden autumn foliage.

#10  Knock the snow off the branches using a bamboo cane. Even a few inches of snow can bend the branches right to the ground.

Sometimes the greatest plant discoveries are not too far of the beaten track. This was certainly the case with  Hamamelis x intermedia  Jelena.

Horticulturalist Robert de Belder bought a piece of land with his brother in 1952. The ground was full of weeds and thickets of shrubs. That same piece of ground had been created as an arboretum in 1858 by the Horticulturalist Charles Van Geet. Up until WW1 the nursery man Antoine Kort had been trialing the Hamamelis species there. But after two world wars the place had become neglected and overgrown.

In amongst one of those thickets almost 50 years later Robert de Belder discovered ‘Jelena’. He named it after the Slovakian horticulturalist whom he had fallen in love with.

You can read more more about the horticulturalist Jelena de Belder here.  They later discovered Hamamelis x intermedia ‘Diane’ and named it after their daughter.  That same piece of land is now Kalmthout Arboretum. It’s renowned across Europe for its collection of Hamamelis.

You can see mature unpruned witch hazels at the Hamamelis Festival at Kalmthout Arboretum in Belgium. Hamamelisfeesten takes place every year between mid January and the end of February.

February is probably the best time to visit. There’s more of the under story of snowdrops and hellebores in flower.  (there’s free entry to RHS members too!) February is a difficult month to predict.  Years ago in my previous garden I would... While out weeding in the garden I noticed a Greater bulb fly – Merodon equestris.... Who here will admit to buying garden plants on impulse?  Don’t all shout out at... Just an update on my phenology report for 2012. Last year was a poor year...