I started photographing garden birds in my early blogging days. Back in 2010 and 2011 I'd take snapshots of the birds that visited the feeders. But I was never happy with those images. I knew what I wanted - but just couldn't achieve it. So I put bird photography on the 'back burner' for many years and concentrated on my floral work.

And so my journey of discovery began. It will never replace my floral work but compliment it in so many ways.

For now I am using my Canon EF 200mm f2.8 prime L lens and have attached a Canon Extender EF 2x III to take these shots, (affiliate link). The Canon 2x lens extender doubles the focal length of a lens, making my 200mm lens function as a 400mm lens. But that doubling of the extended range is at the loss of two stops of the light-gathering ability of the lens. So my ƒ/2.8 lens operates as a ƒ/5.6 lens. However I plan to purchase equipment specifically for bird photography very soon.

The Robin Who Showed The Way

I enjoy watching birds and grew up with a grandmother who loved them. She knew so much about them, fed and cared for them. I learned much from her but really could have learned much much more.

As a child the 1977 BBC adaptation of The Secret Garden by Frances Hodgson Burnett also enthralled me and so did the book. I'd skip around the many pathways  with my skipping rope in my granddad's very large garden just like Mary. But I loved the robin in that story. I always wanted to find a special key buried in one of his flower beds and a robin to lead me to my very own secret garden!

If you loved reading this book as a child you're in for a treat as The illustrated Secret Garden 100 anniversary edition is now on sale and would make a great gift. (affiliate link)

She stopped with a little laugh of pleasure, and there, lo and behold, was the robin swaying on a long branch of ivy. He had followed her and he greeted her with a chirp. As Mary had skipped toward him she felt something heavy in her pocket strike against her at each jump, and when she saw the robin she laughed again.

“You showed me where the key was yesterday,” she said. “You ought to show me the door today; but I don’t believe you know!”

The robin flew from his swinging spray of ivy on to the top of the wall and he opened his beak and sang a loud, lovely trill, merely to show off. Nothing in the world is quite as adorably lovely as a robin when he shows off—and they are nearly always doing it.

Mary had stepped close to the robin, and suddenly the gust of wind swung aside some loose ivy trails, and more suddenly still she jumped toward it and caught it in her hand. This she did because she had seen something under it—a round knob which had been covered by the leaves hanging over it. It was the knob of a door.

She put her hands under the leaves and began to pull and push them aside. Thick as the ivy hung, it nearly all was a loose and swinging curtain, though some had crept over wood and iron. Mary’s heart began to thump and her hands to shake a little in her delight and excitement. The robin kept singing and twittering away and tilting his head on one side, as if he were as excited as she was. What was this under her hands which was square and made of iron and which her fingers found a hole in?

It was the lock of the door which had been closed ten years and she put her hand in her pocket, drew out the key and found it fitted the keyhole. She put the key in and turned it. It took two hands to do it, but it did turn.

Then she slipped through it, and shut it behind her, and stood with her back against it, looking about her and breathing quite fast with excitement, and wonder, and delight.

She was standing inside the secret garden.

I've never found a secret garden but I created a wild one of my own and now I'm taming my own robin.

Firstly you've got to encourage the birds into the garden!

A lot of patience goes into getting my shots and photographing garden birds is a real challenge. For me it's the hardest genre of photography to master and I'm just at the beginner level. I know that lots of it is determined by the gear you have. But nevertheless it's tough no matter what gear you use.

Birds never seem to appear in the garden when the light is great. They are much more active first thing in the morning and later in the evening. In winter that means that the ISO is extremely high. So you've a lot of noise to contend with in your images when post editing. More noise means that you lose some of that feather detail so it's trying to get the right balance. Plus you've also got to have a high shutter speed to keep the birds head / eye sharp. It's not easy in a Scottish winter when the daylight is so poor.

You can't pose a bird. Can't get them to move their heads to the right or left. Nor can you move them into the best light so that the light is coming over your shoulder. They are so flighty, so small, move at warp speed and ever so timid.

Phew it's just so difficult!

You'll discover that there's more action in your garden than you ever thought possible. Who needs the tv when there's more drama while standing at the window by the kitchen sink!

One robin has decided that a corner of the garden with lots of feeders is his patch. He'll guard the feeders and will even attack the wood pigeons if they decide to nibble some of the seed. I've been trying to tame him and get him to take suet from my hand. So far he's flown over to my hand and hovered next to it. But hasn't as yet landed on it. I won't give up. One day I'll hold a robin again the way I did as a child with my grandmother.

Robins, chaffinches, coal tits, blue tits, great tits, dunnocks, sparrows, blackbirds, wood pigeons, a little wren and a pair of bullfinches have all been visiting for the past few weeks. I know there are goldfinches and greenfinches in my neighbours garden but so far they've not crossed the road into mine. Even the sparrowhawk has made an impromptu visit ... thankfully all the little birds scarpered into safety. The sparrowhawk was just as startled as I was when he/she saw me in the garden. By the end of the winter I hope I'll have photographed many of these feathered visitors to the garden.

If you need help identifying the birds that come into your garden, I recommend the RSPB Pocket Guide to British Birds book. (affiliate link) 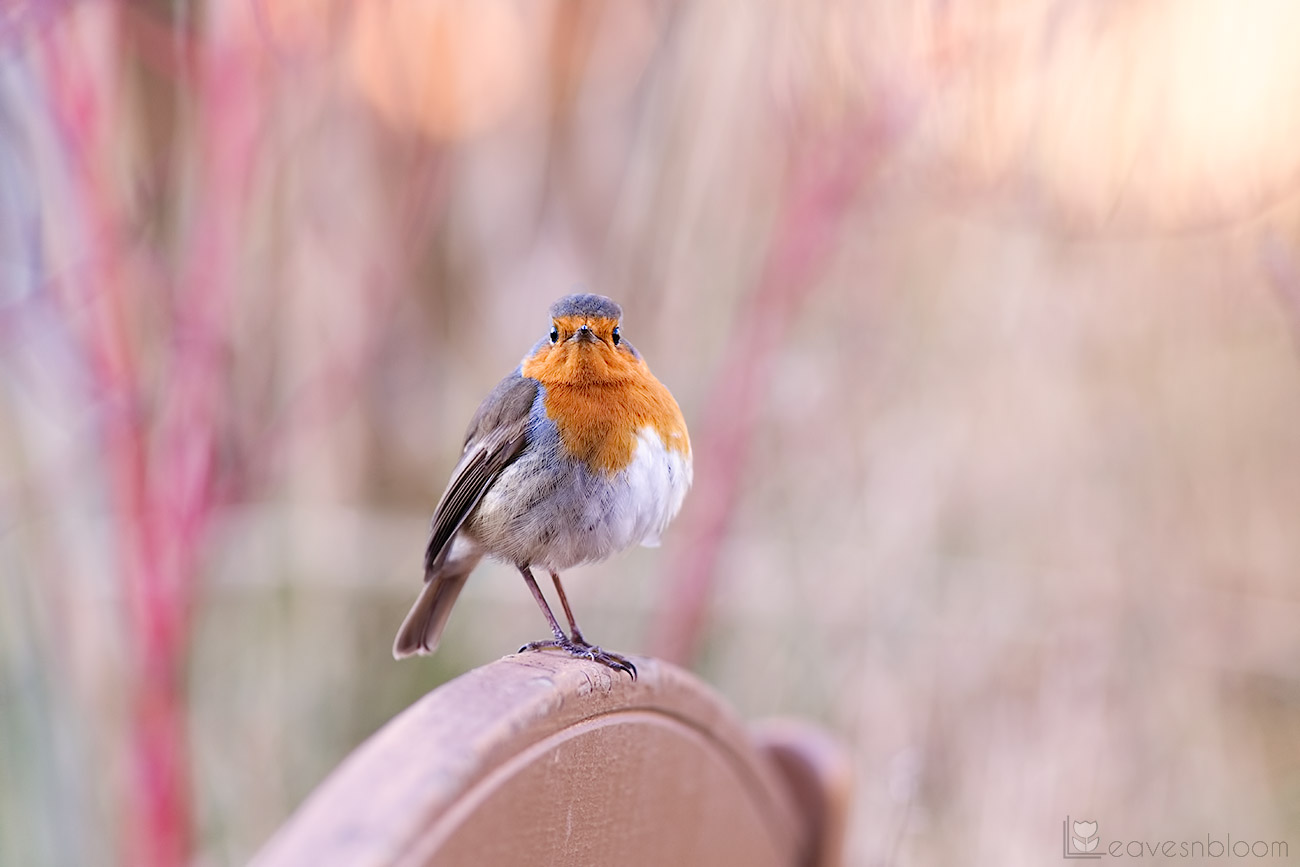 Finally just take pleasure in the simple things in life. Make time to enjoy being out and about in the garden when there's little weeding to be done. Whether you're photographing garden birds or just observing them - keep yourself warm and cosy while outdoors. But best of all have fun and enjoy your passion just like me!

Are you interested in garden photography? I don't just take photos ... I grow photos!...

Here's one of my photography tutorials on mirror lock up when doing macro photography ...  However...

My Model All that glitters can be gold if you follow along with another one...

Have you visited any bluebell woods in Perthshire? In the month of May many of...

Have you noticed that there are times of the year when you depend more on...