Growing perennial tulips is very straightforward if you follow the tips in this blog post. But before we get to those tips I thought I’d share some really interesting information about this bulb.

Tulips have quite a fascinating history. They were introduced into Europe from the Ottoman Empire around 1562 and by the 1630’s they became the most sought after plant for the garden. No one in Europe had ever seen such rich colours from a flower before and they looked so different from any flower that was available in Europe.

This post may contain affiliate links, which means I may receive a small commission if you click on a link and purchase something that I have recommended. Clicking these links will not cost you any extra money, however, as an Amazon Associate, I earn from qualifying purchases which helps me keep this site going! Please check out my disclosure policy for more details.

Tulips were known as the rich man’s toy and their floral display each spring showed off the owner’s good taste and their hefty bank balance. The most sought after bulbs were the red & white ‘Semper Augustus’ tulips.

This tulip is famous for being the most expensive tulip sold during the tulipomania in the Netherlands in the 17th century.

Research in the 1920s would finally reveal that the source of the ‘Semper Augustus’ beauty was also a curse – a virus known today as the TBV or ‘Tulip Breaking Virus’. While it caused amazing color patterns, it also served to weaken the bulb, including any offshoots produced.

With each subsequent generation, the bulbs would become more and more degraded, until one day they would be too weak to flower and the genetic line would die off.

Today, we can only speculate, but this seems to be the likely end faced by the world’s most famous Tulip. Despite all of its beauty and prestige, it went out with a soft whimper, and today all we have left are paintings. [1]

Wealthy Dutch merchants (bloemisten tulip fanciers) traded on ‘tulip futures’ in the Dutch taverns. The price of a bulb just went up and up as the stock was so limited, especially if it was a new colour variant.[2]

However, the problem with tulips is that it takes 7 years for a seed to mature into a flowering bulb. Likewise, they only produced a couple of side bulbs while they were growing in the ground.  As a result, people traded in tulips without actually seeing what they were buying and that required a considerable degree of trust between the buyer and seller.

These tulip fanciers were willing to speculate – buy now pay later at exorbitant overinflated prices; even placing their homes up for collateral. Huge amounts of money exchanged hands and a rare single bulb could be worth more than one of the most expensive houses in the centre of Amsterdam. In one instance history records that a canal house was sold for 3 tulip bulbs.

This obsession with tulips became known as tulipmania [3]. But by 1637 the market crashed spectacularly and history records that many went bankrupt. You can listen to the story below:

In Mike Dash’s book Tulipomania: The Story of the World’s Most Coveted Flower and the Extraordinary Passions it Aroused (affiliate link) he writes that a single bulb could sell for more than £300,000 at today’s prices.

While in Anne Goldgar’s book Tulipmania: Money, Honour, and Knowledge in the Dutch Golden Age (affiliate link), she casts doubt on the number of bankruptcies. She has discovered that only a few lost money and the claims of mass bankruptcy were more likely as a result of later satire articles mocking the tulip fanciers.

In fact real – as opposed to paper – losses may have been limited; this was a form of futures trading, often involving a chain of sellers and buyers in a series of promises to pay. Money might well only change hands when the bulbs were actually collected in the summer by the buyer from the last seller in the chain. Until then all was on hold, so in the event perhaps the only loser might have been the first seller in the chain, and he would possibly still have his bulbs. Consequently, while there were losses, they would have probably been far below the sums apparently lost in early 1637. [4]

James Justice held the office of Clerk to the Scottish Parliament and was a very keen gardener and writer. He lived at Crichton, near Dalkeith, Edinburgh and his magnificent Justice Hall garden held all sorts of rare plants. He had achieved instant fame and notoriety when he grew and ripened the first pineapple in Scotland thanks to his pineapple stove invention.

By the time James Justice became interested in tulips their prices had dropped to a more reasonable level. Inevitably he caught tulipmania and thought nothing of spending £50 per tulip bulb.

He even imported a shipload of soil from Holland as he believed the bulbs would thrive better in his garden if he used Dutch soil. Alas by 1735 his extravagance for these bulbs and other rare plants made him bankrupt!

…that during the winter of 1944-45, the Dutch tulip growers were unable to export their bulbs and as a result, they began to sell them as food as they had a high starch content! They supposedly taste like potatoes and onions.[6]

How times change! In the 21st Century, we have Snowdropmania and maybe in the future, it might even be Hyacinthmania! [7]. Nevertheless, tulip bulbs are relatively inexpensive due to extensive breeding, and there are so many to choose from. Tulips are so easy to grow and if you choose carefully you can have early, mid and late-flowering varieties giving a continuous display throughout the spring.

Buy your tulip bulbs now but don’t plant them until November or after there’ve been a few touches of frost. The frosts kill fungal diseases in the soil and since tulip bulbs are susceptible to tulip fire you give them some protection when you plant later in the year.

One tulip bulb that I’ve grown for many years in the garden is the elegant and scented Tulip ‘Ballerina’  (affiliate link). It has soft orange fluted petals, flushed with cerise pink and a yellow base. The bulb starts to flower from late April to early May, and when the sun shines the flowers open wide and then close tightly later in the day.

Tulip ‘Ballerina’ is a tall tulip growing to 55cm. However, if you plant the bulbs deep in the soil the stems will never break in the wind and never need to be staked. Not only does a deep planting anchor them well in the ground; they are more likely to be perennial and come back in subsequent years.

Firstly Tulip bulbs are irritant to the skin and eyes, so handle with care when planting.

Plant them with the pointy part of the bulb facing upwards, spaced at least 4 inches apart. Only plant healthy bulbs – discard any soft or mouldy ones and choose a sunny location in well-drained soil.

Make sure that they are planted much deeper than what it suggests on the back of the packet. I plant mine about 12” below the ground. This means that the bulbs never need to be staked, it deters the mice and squirrels and you’re less likely to dig up the bulbs when they are dormant in the soil. If you have trouble digging so many holes you can buy a Bulb Auger Drill Bit (affiliate link) which attaches to a drill and digs through clay and rocky soil without giving you blisters.

Make sure to add plenty of grit and compost if you’ve got heavy clay soil. Or else grow in a raised bed. However, they don’t thrive in very acidic soil. Some parts of Scotland have very acidic soil, so in those areas, it’s best to grow tulips in seasonal containers.

You can also grow them with other bulbs in a container– just make sure you plant them near the bottom of the pot. Use Miracle-gro bulb fibre (affiliate link) in your container, or else a mix of 3 parts multipurpose compost with 1 part grit.

As soon as the shoots appear above the soil start to feed with a tomato feed or high potash feed every 7 – 10 days; this promotes good flowering the subsequent year. I thoroughly recommend Chempak High Potash Feed Fertiliser Formula No.4 (affiliate link) as I’ve used it for years on my plants and bulbs with great success.

Once they’ve finished flowering dead head and let the leaves die back naturally. You can stop feeding the bulbs with the tomato food / high potash feed once the leaves start to go brown.

Growing perennial tulips using the tips above will not only make sure that your bulbs regrow every year, but also give you great flowers too. However not all tulip bulbs can be grown perennially. Here’s a useful list of varieties that you can grow…

Other species and hybrids:

Finally, I’ll leave you with a short video on the history of the tulip…

[1] What is the most famous tulip in history? [2] https://en.wikipedia.org/wiki/Tulip_mania [3] https://www.historytoday.com/miscellanies/tulipmania-overblown-crisis [4] Tulipmania: Money, Honour, and Knowledge in the Dutch Golden Age [5] https://www.in2013dollars.com/uk/inflation/1750?amount=50 [6] https://amsterdamtulipmuseumonline.com/blogs/tulip-facts/eating-tulip-bulbs-during-world-war-ii [7] Snowdropmania: In 2014 Joe Sharman of Monksilver Nursery sold a single snowdrop bulb Galanthus plicatus ‘Golden Fleece’ on eBay for just over £1300. While two years earlier Ian Christie’s nursery in Kirriemore sold a single yellow flowering Galanthus woronowii Elizabeth Harrison for £725. Previously the highest price for a snowdrop bulb had been ‘E. A. Bowles’ which sold for £350.

Not so sure if we’ll ever have hyacinthmania, but Thompson and Morgan purchased the worlds first Black Hyacinth Midnight Mystique in 1998 for £50,000 a single bulb! 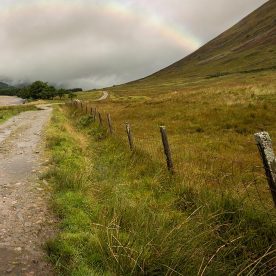 Living in the countryside means that fences appear quite a lot in my photography. Today... 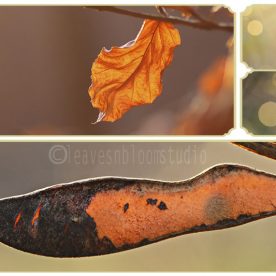 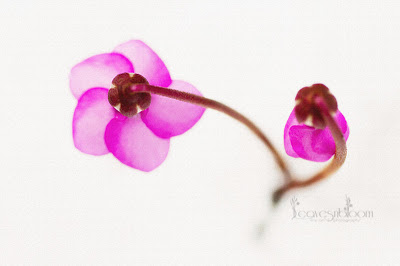 Today’s the day when I sing the praises of the Old Faithfuls that bloom in... 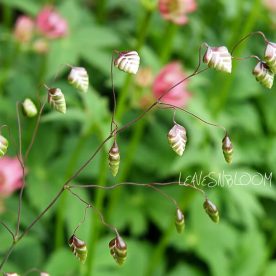 One newcomer to the borders has been a really distinctive looking ornamental grass called Briza... 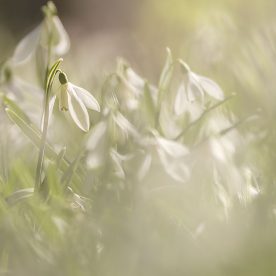 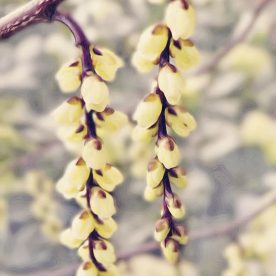 I hope that many of you downloaded the pixel bender oil painting plugin this past...